Born in Palma in 1991, pianist and fortepianist Joan Travé develops his musical activity in a wide variety of fields.

In 2008 he made his debut with the orchestra, performing Beethoven’s first Piano Concerto. Since then he has given concerts in various European countries. The programs of his recitals often feature a wide range of music: from English Renaissance pieces to avant-garde works for piano and live electronics, for example. Recently he gave a concert at the prestigious Chopin Festival in Valldemossa, which was the first two-piano program in the festival’s history.

Encounters with musicians such as Lorenzo Coppola, Eva Maria Pollerus and Carmen Leoni allowed him to discover the world of historically informed performance and period instruments. Fascinated by this approach, he studied fortepiano and romantic pianos with Jesper Christensen. The discovery of the sounds and ways of musical oratory from older eras through the study of instruments, documents and historical recordings is a central part of his activity.

In recent years he has carried out various research projects; one of them –on the manuscript of F. Chopin’s Nocturne in c sharp minor– was presented in a lecture in the “Càtedra Chopin” Academy, at the Carthusian Monastery in Valldemossa.

Chamber music occupies a significant place in his musical day-to-day life. He collaborates in various ensembles with different musicians playing modern and historical keyboard instruments. He is a co-founding member of the Polymos Ensemble, a chamber group composed by musicians from several countries, that explores very different repertoires. The group has offered concerts in Germany, Spain and Italy.

He has worked with several living composers and experts in contemporary music: Orm Finnendahl, Nicolaus A. Huber and Lucas Fels, among others.

He began his musical training with Lucía Luque, María Jesús Salvà and Ireneusz Jagla. He graduated with honors from the Conservatory of Music of the Balearic Islands, where he studied with Miquel Estelrich and Manuel Carra. At the University of Music and Performing Arts in Frankfurt he completed a master’s degree under the direction of Catherine Vickers. He currently combines his concerts, artistic research with teaching in Frankfurt. 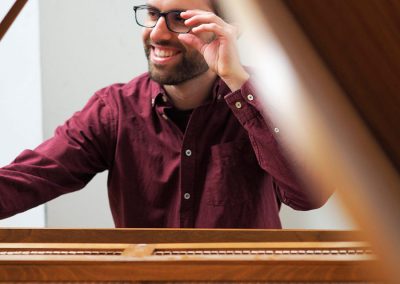